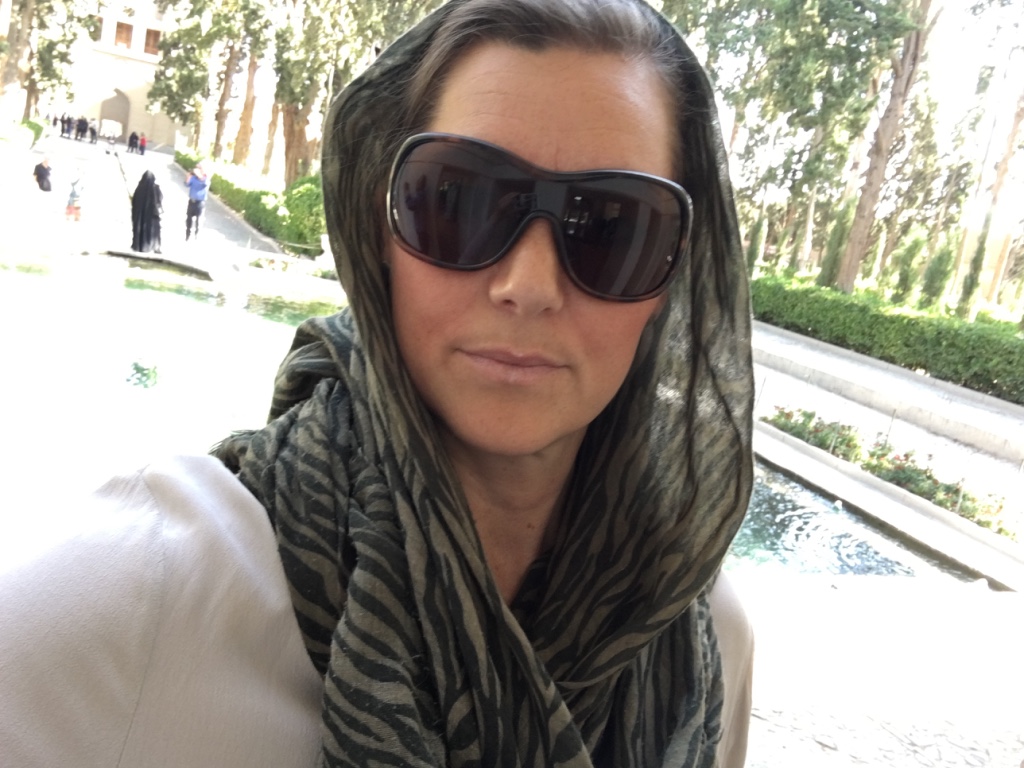 Some people have a moment in their lives when everything changes. You might not realize at the time, but it changes you profoundly. The moment is often connected to a strong emotion; fear, happiness, devastation or something else.  I’ve had a few of those along my journey in life.

My moment of change that ignited the flame of GLOW4equality was a panic attack in a dusty garage outside a mosque in Iran in 2017. I want to take you on that journey to give you a glimpse of where my deeper engagement in women’s and girl´s rights started. Please read or listen.

I’ve always been an empathetic person and dared to speak up for myself and others. And what I’m most passionate about is for the rights of women and children. Having been born and raised in Sweden, one of the most equal countries in the world, I’ve been blind to the reality in other parts of  the world… and that’s probably why my awakening came so late in life. Sweden has one of the world’s best economies, education, social security and healthcare systems. And it pretty much has equal rights and opportunities for everyone. Of course, we have our challenges, but we’re still one of the most equal countries in the world. And I’ve always felt equal to the men around me, my father, my brothers, my husband, in business life, among friends, everywhere. That’s maybe why it hit me so forcefully that day in the dusty garage in Iran – the oppression of women is for real and it’s enormous.

So in 2017, my business partner at the time, Christer, and I went to Iran on a combined business and tourist trip with a group travel and coaching community. We were going to attend an international congress on Hypnosis and Mental training. It was at the end of this trip that I experienced my moment of change.

"Enjoy your stay!" a man shouted passing us on his bike as we first stepped off the bus from the airport. During our ten days there, people approached us, asking about what brought us to the country and talking about life in Iran; both the beauty of the country and also very quickly the bad; namely the government oppression. We could really sense that this is a country starved of visitors. When most people think of Iran, all they have is the images they see in the media - generally a pretty dark picture. But it is a beautiful country and so different from Sweden, and I am grateful that I’ve had the opportunity to experience it and form my own picture. Many of us in the group had pleasant encounters with the Iranian people; they were curious, welcoming and open-hearted. 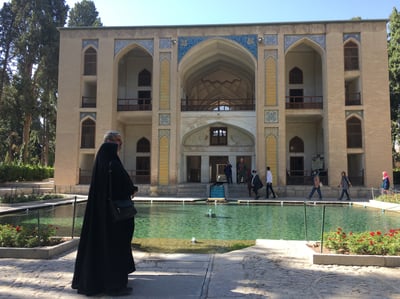 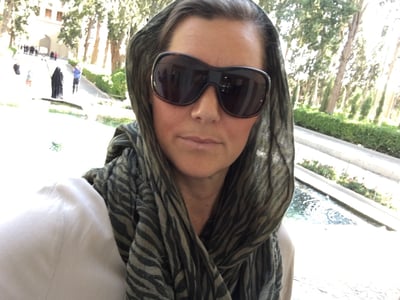 Iran is a Theocracy, which means that the political leadership is held by the religious leaders. Both men and women are oppressed but the inequalities to me are insane. Sharia law is applied to the max; punishment by whipping, raids in people's homes and public executions. Legally a woman’s testimony is worth 50% of a man's. If a woman want’s a passport she needs the approval of her closest male relative. In case of any divorce, women automatically lose custody of children older than nine years old. And of course, there is the mandatory hijab. The hijab the headscarf, the vail, that women are obliged to wear in public but also everything that comes with it. Iran has a Revolutionary Guard to make sure that people, especially women and girls, follow the rules.

A great movement started shortly after our visit, one in which women risk their lives protesting against the mandatory hijab by removing it or sharing photos of themselves without the hijab. I stand with these brave women in their dream of freedom.

The people of Iran are still affected by the Revolution of 1979. Most are affected by it every day, whether they fled the country or stayed. During our trip, people on the streets talked to us about the Revolution… 40 years after it happened.

The emotions of this ten-day trip kind of crept up on me. The first time I felt a sense of oppression was in my own living room a couple of weeks beforehand, when I was trying on the hijab, which of course even I would be obliged to wear. As I experienced all the beauty of the country and yet simultaneously all the oppression, it all built up inside me and I didn't see the panic attack coming… but looking back I completely understand it.

We were visiting a mosque towards the end of our trip in the city of Mashhad in northeast Iran. We’d already visited a number of more historical mosques, but this one was active. The Imam Reza Shrine is a mosque about 64 soccer fields in size and contains the cemetery of Imam Reza, one of the prophets of Islam. From what I understand, it’s the Shia Muslim’s equivalent to Mecca, the holiest place for Sunni Muslims. The mosque is open year-round, day and night and receives around 30 million visitors every year, pilgrims; Iranian and non-Iranian Shia Muslims. Knowing what I know now, I'm not sure I would have joined our tourist trip there.

Image: Chadors on display along the shopping street in Mashhad. 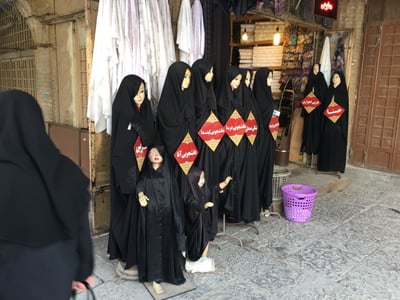 On the bus as we got closer to the mosque, our guide gave us strict instructions on how to act during the trip. We women had to wear not only the hijab but a chador, which is the full-length version that covers the feet. I could feel the anxiety welling up within my body. The guide also instructed us to stick together, since we were entering the building at one spot and exiting at another.  She also made it clear how VERY important it was for us to follow the rules. Do not remove your chador – do not lose track of the group – do not leave the trail – do not stand out.

Once we got off the bus us we women put on the chadors. At first, the European men thought we looked funny all dressed up and wanted to take a picture.  But they soon understood, when I made it clear, that this was not a moment for joking around.

There were armed guards outside the mosque’s entrance and people had to go through a security check to get into the mosque. The atmosphere was tense. Most of the visitors waiting in line had probably longed for this moment, when they’d get to visit this special religious place. But I just grew more and more anxious as we waited in line for the security check, men and women separately. All the women and girls were in black chadors. I hardly knew where to look or stand. Little girls swirling around in their chadors, covered from head to toe. Standing there in the midst of all these women and young girls in chadors I just wanted to scream out – this is not OK, there is another way, there is a different life, it shouldn’t be like this.

As I came out of the security check and stood with our group inside the mosque, something just exploded inside me, I panicked! I ran back out – back through the security check ripping off my veil – the whole chador. I ran into the street outside and was crying hysterically. The female oppression had just become too real, too tangible. And bowing to the rules went against everything I am and everything I believe in.

Earlier our guide had made it very clear – do not remove your chador – do not lose track of the group – do not leave the trail – do not stand out. My body broke all of these rules and it was completely out of my control.

Outside I quickly realized what had just happened. Armed guards and pilgrims were staring at me: a tall Swedish woman with no chador, upset, crying, angry, pacing around intensely. I realized all this and pulled myself together…. I made a point of putting the chador back on, probably talking to myself, crying, and rejoined the line for the security check.

Back inside the mosque I called my colleague Christer. Luckily, he had switched on his phone all those 5000 kilometers from home – and we met up. During the entire guided tour I walked by myself, at the edge of the group with tears running down my cheeks, for an hour straight.

I'm an atheist and I want to make clear that I believe in human rights, freedom of opinion and expression and freedom of religion. This experience stripped that away from me - for a short period of time. But many people never have a choice.

I listen and look up to a lot of people who are committed to their cause around the world. And what I see in many of them is that they come from a rough childhood, some are refugees, second generation refugees or have lived under oppression in some way. I understand where their drive comes from. They don´t have any other option than to work harder to succeed. For me, until I was 40 years old, I felt that getting involved a little here and there in the issues that are close to my heart was enough. But that moment in Iran made me realize that I needed to do much more, and I that’s what made me decide to use my entrepreneurship to contribute to gender equality. That became my Moment of change and the start of GLOW4equality.

Those of you wondering about photos from The Imam Reza Shrine, i did not take one, the moment was too tense.